Several studies prove its efficacy against acne and dandruff, and now new studies have demonstrated its functionality for body odor and feet and nail care.

Human sweat is odorless, but the interaction with the bacteria Corynebacterium striatum produces certain molecules responsible of the excessive and strong smell. What if we could rebalance these bacteria to control this body odor?

Quora Noni offers a new uncharted path to fight against strong body odor, with an innovative approach free of chemicals and aggressive substances. 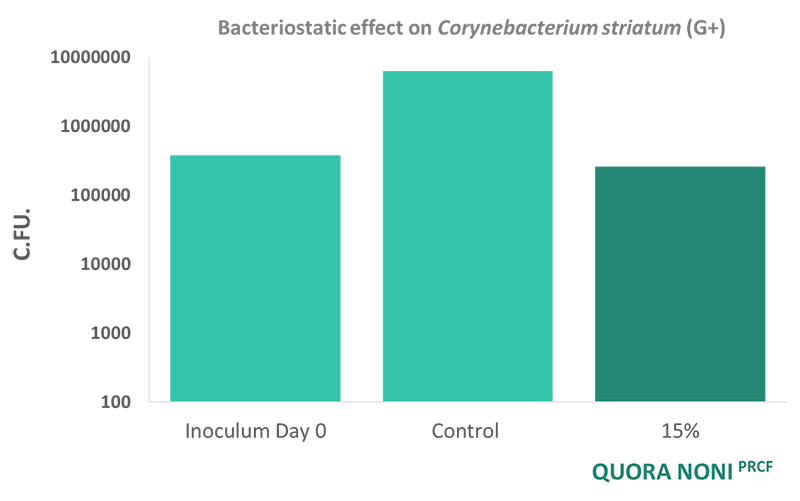 The results show that Quora Noni inhibits the growth and reproduction of C. striatum, maintaining the populations of this bacteria under control, without killing them. This test demonstrates the bacteriostatic effect of the active with this species of bacteria.

To demonstrate the antibiofilm effect of Quora Noni in C. striatum, specific representative biofilms for the species were generated in a selective medium with glass coupons to facilitate the aggregation of the microbiota.

After the biofilm generation was standardized several studies were carried out to analyze the C. striatum populations. Biofilm density and planktonic live cells in suspension, with and without the active Quora Noni in the medium, were quantified.

The results showed that there were very few cells forming biofilm when Quora Noni was added compared to control (cells on coupons).

Results show that QUORA NONI inhibited the biofilm formation by -99%, while preserving alive the planktonic cells. This demonstrates the antibiofilm effect of the active on Corynebacterium striatum, and its potential efficacy to control the strong body odor caused by these bacteria.

Epidermophytum flocossum is a pathogen fungus that can cause skin and nail infections. These cosmopolitan microbes can be found in the ground and cause infection by direct contact with the skin.

Quora Noni can control the growth of this fungus by hacking its communication systems. A bacteriostatic test was carried out to analyze the activity of the active to E. flocossum.

The results show that Quora Noni inhibits the growth and reproduction of the fungus E. flocossum, maintaining the populations under control, without killing them, showing its fungistatic effect. 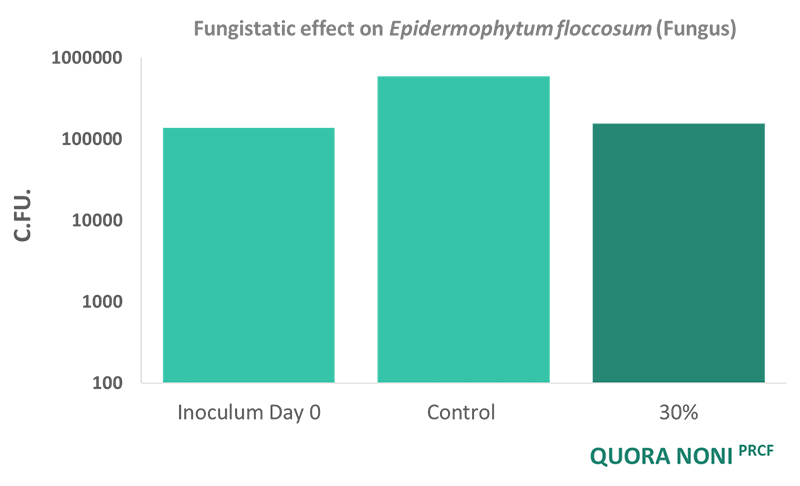 The results are a proof of concept that opens the door for the possibility to use the active to treat feet and nail fungi infections caused with this specific species of fungus.