The claim was reported to the ASA regarding whether it was misleading, however, the UK watchdog ruled in Nivea's favour and did not uphold the complaint 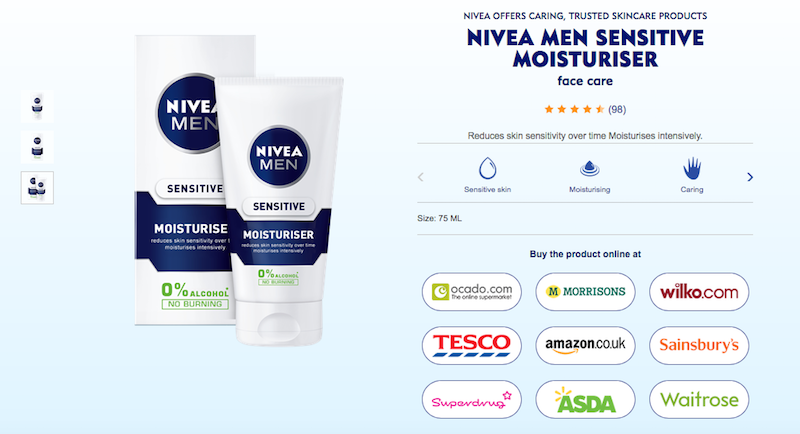 Nivea Men was confronted by the UK advertising watchdog ASA, after a complaint was lodged about one of its adverts by a concerned viewer.

On a product information page for Nivea Men Sensitive Moisturiser on nivea.co.uk, an image of the product packaging was displayed with the claim '0% alcohol - no burning'.

A complainant challenged whether the claim was misleading because the product includes cetearyl alcohol, although the ASA ultimately ruled in favour of Nivea and its parent company Beiersdorf.

Beiersdorf explained that the claim 0% alcohol related to ethyl alcohol or ethanol, which is commonly used in cosmetics and can cause a stinging feeling on the skin.

It pointed out that the term 'alcohol' relates to a broad variety of organic compounds, comprising more than 700 different substances including paracetamol and cholesterol, and other ingredients ending in '-ol'.

Ultimately it noted that 0% alcohol when used in relation to cosmetics was commonly understood to mean the absence of ethyl alcohol.

The company showed that the claim use, which allows for the inclusion of other alcohols such as cetearyl, benzyl or lanolin alcohol, was endorsed by the CTPA and the US' FDA.

The ASA backed Beiersdorf and explained: "We understood that cetearyl alcohol, whilst also an alcohol compound, had different properties to ethyl alcohol and different effects on the skin."

It added: "We considered that those to whom the ad was directed would interpret the '0% alcohol' claim, in the context in which it appeared, to mean the product did not contain the type of alcohol that they would associate with causing a reaction or burning feeling in sensitive or easily irritated skin (ie ethyl alcohol).

"We noted that the product did not contain ethyl alcohol and therefore concluded that the claim '0% alcohol' was not misleading."

Beiersdorf was told that no changes were required to be made to the advert.