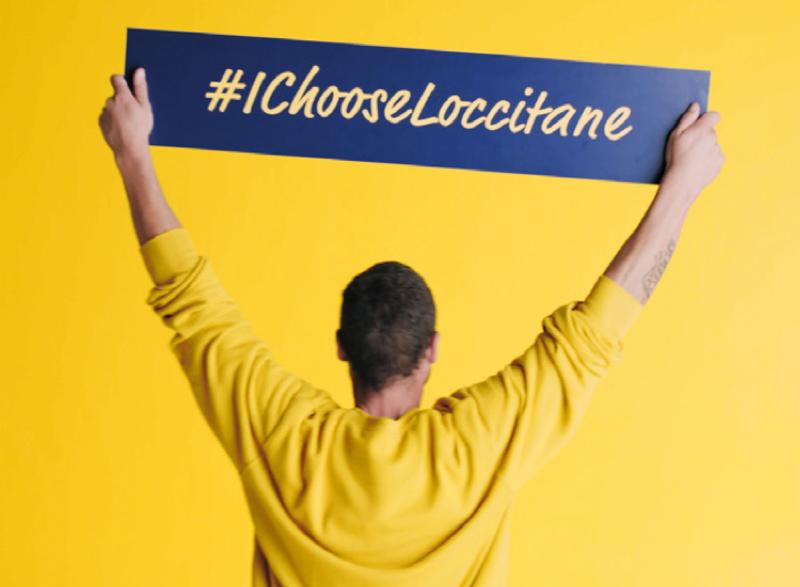 L'Occitane, the French natural beauty brand, is showing its true colours with the launch of its latest campaign, designed to demonstrate the brand's core values of sustainability and empowerment.

For its #IChooseLoccitane video clip, the Provence-based brand has enlisted a diverse cast of men and women to represent four of its key commitments: Supporting Producers, Empowering Women, Reducing Waste and Respecting Biodiversity.

Said to be inclusive and reflective of modern Britain, the clip sees the consumers reveal their reasons for choosing the brand amid a yellow backdrop, which L'Occitane chose to represent the sunshine of Provence as well as its positive associations with activating memory, encouraging communication, building confidence and stimulating the nervous system, according to the brand.

They include L'Occitane customer Bay, an activist for the Project Earth campaign who helped get charity Oxfam into luxury department store Selfridges, who shares how she was inspired by L'Occitane's relationship with its producers and recycling initatives.

She commented: “L’Occitane are humble… they know their producers by name with committed long term relationships, so the land, the people, the plants and the ecosystems all flourish.”

L'Occitane has offered Eco-Refills of products in its stores since 2008, helping to reduce waste by 97%, according to Ameera, who also created the illustrations seen in the video to bring the brand's principles to life.

Giving back to the planet

The clip also features 'biodiversity enthusiast' Evon, who has worked for “years” to raise awareness about the importance of biodiversity and looking after our planet.

She highlights L'Occitane's origins in a 'biodiversity hotspot' in the Mediterranean basin, and its efforts in saving a thousand plant species as well as planting “thousands of trees in the UK and counting”.

Finally, there is Jay Jay, a women's empowerment activist who describes herself as “super pro-black, super proud African [and] super feminist”.

Applauding L'Occitane's efforts in supporting the women who harvest the shea butter used in its skin care products, she noted: “By committing to female producers in Burkina Faso, in the last 15 years they have gone from employing 12 women to over 10,000 on Fairtrade agreements.”

The five consumers will appear in a series of films across L'Occitane's social media channels, with each dedicated to exploring a different brand cornerstone and set to roll out across November and December.

The campaign is L'Occitane's latest effort to build brand awareness, following on from its 'How do you say L'Occitane?' clip last year, which saw it team up with radio personality Nick Grimshaw and former Great British Bake Off contestant Mamon Lagrève to teach viewers how to correctly pronounce the brand's name (“Lox-ee-tan”).