From the EU Cosmetics Regulation to halal certification and REACH, the 2018 Cosmetics Business Regulatory Summit covered a broad range of key legislative topics for the beauty and personal care industries 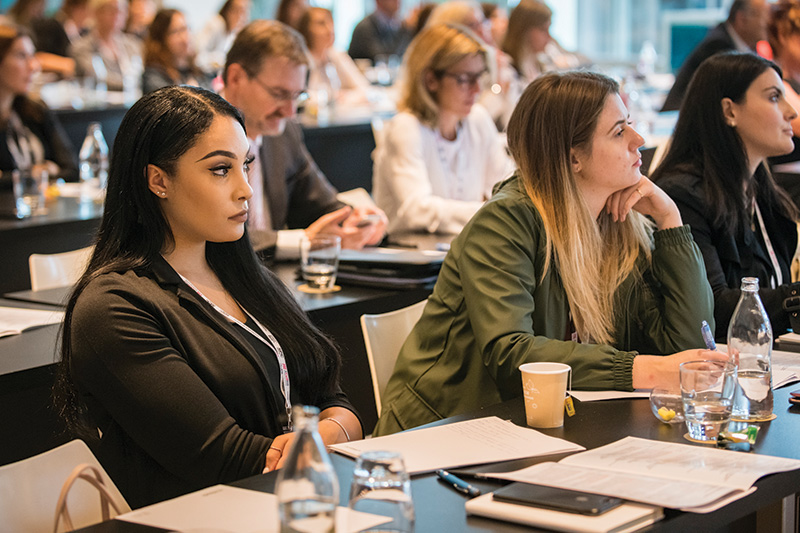 The fifth edition of the Cosmetics Business Regulatory Summit took place from 8-9 October 2018 at Meliá Barcelona Sky. What follows is a synopsis of the in-depth presentations delivered during the event.

The successes and limitations of the European Cosmetics Regulation five years on was a key theme at 2018's Summit.

The Regulation is "a work in progress subject to modifications" and there have been 30 amendments in the past five years, with the most recent surrounding the maximum concentration usage of UV filter MBBT (nano) under Annex VI; peanut oil and hydrolysed wheat proteins under Annex III; and the banning of ZnO colourant in applications that could lead to exposure to the end user via inhalation.

Ray Boughton, Toxicology Director at Delphic HSE, the second speaker on day one, focused on safety assessment of cosmetic products.

His presentation zeroed in on the margin of safety (MOS) under the Cosmetics Regulation, which is calculated by dividing the hazard posed by the substance (based on historical test data and called the no observed adverse effect level – NOAEL) by exposure (the systemic exposure dose – SED).

If the value is greater than 100, the substance is generally considered safe. But this is deceptively simple, he warned, noting: "Just having a number is of no use at all if you don't understand the science behind it."

The regulation intends to harmonise requirements across the EU and will be applicable to mixtures classed as hazardous.

The final presentation on day two discussed the RP role and was delivered by Richard Bartlett, Manager, Europe at Delphic HSE. The RP is a legal or natural person (within the EU) able to demonstrate compliance with the obligations set out in Article 4 of the Cosmetics Regulation.

A likely future hurdle will be Brexit, Bartlett told attendees. The EU and UK are working towards a transition period until the end of December 2020, during which the UK would be considered a EU member state.

• Plan your new product introductory process (flow, permissions, agreed-upon content);
• Acquire tools that ensure efficiency and measurements;
• Gain better understanding from your supply chain to decrease risk;
• Make use of metrics and visual dashboards;
• Align your supply chain to your process;
• ...and have successful launches! 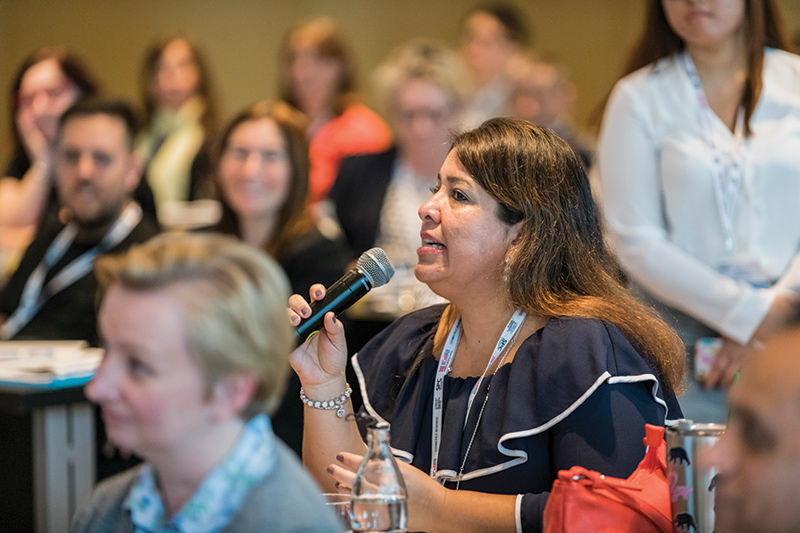 Indonesia's Law 33/2014 (when it comes into force in 2019) will see mandatory labelling and certification of cosmetics sold in Indonesia as halal.

The law will demand clarity regarding raw materials used, equipment and processing, and the formulation of the final product.

The authorisation body will be the Halal Product Assurance Agency (BPJPH), Koller told attendees, while verification will be carried out by the Halal Inspection Institution (LPH).

Products from overseas with foreign halal regulations might be acknowledged in Indonesia, subject to cooperation between the involved governments.

Following Koller and also discussing halal was Salma Chaudhry, founder of beauty brand Halalcosco. She explained that her company's founding principles were halal, safety, quality and the avoidance of 'najis' and 'mutanajis' – Arabic terms meaning 'unclean' and something "that started off as clean but has been cross contaminated", respectively.

"When you're choosing a [certification] body, a big tip is to look at the country to which you are hoping to export and its specifications" as to which certifying bodies it recognises, she said. 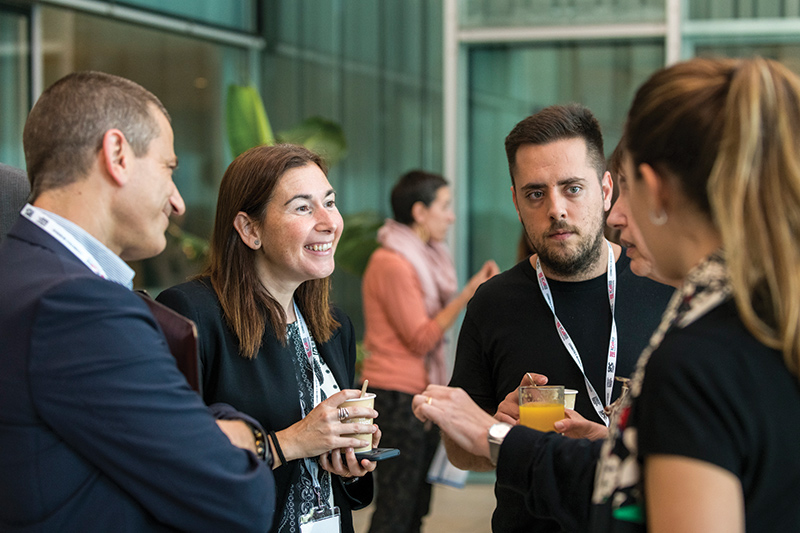 Established in 1999 and currently made up of Bolivia, Colombia, Ecuador and Peru, the common cosmetic regulation for the Andean region is Decision 516, which is currently in the process of amendment, with updates expected to come into force in November 2019.

While there are multiple changes, some of the key ones to expect include the scrapping of the deeply unpopular Certificate of Free Sale; new and separate labelling regulations (previously under Decision 516); and a new process to include importers of the same product (from different companies) under one notification.

Haslacher flagged the US Fair Packaging and Labeling Act (FPLA) – to prevent deceiving packaging – as an important piece of new legislation, as well as the FDA's Voluntary Cosmetic Registration Program and several California-specific laws, including the California Safe Cosmetics Act and Proposition 65.

The competing proposed Feinstein-Collins Bill and Hatch Bill were referenced, both of which suggest mandatory reporting, registration of facilities and ingredient review by the FDA.

A major move in recent months was Hawaii's first-of-its-kind banning of sunscreens linked to the death of coral reefs in July 2018, and Haslacher opined that Florida could be next, based on local sales of 'reef-safe' sun care.

The Drugs and Cosmetics Rules 1945, meanwhile, covers import & registration, manufacture, labelling & packaging, GMP, permitted colours and standards for cosmetics. Market entry to India can be via three potential routes: the India License(MA) can be held by a "non-distributor authorised agent", your own business, or an importer/distributor.

Over 2.5% of all estimated world trade is made up of fake goods and Emma Monks, Head of Trust & Safety at Crisp Thinking, told delegates that the boom in social media-led shopping has created a 'perfect storm' for counterfeiting.

Monks provided ten social media signs that digital teams can look for to spot a counterfeiter:

The general equation for exposure is: 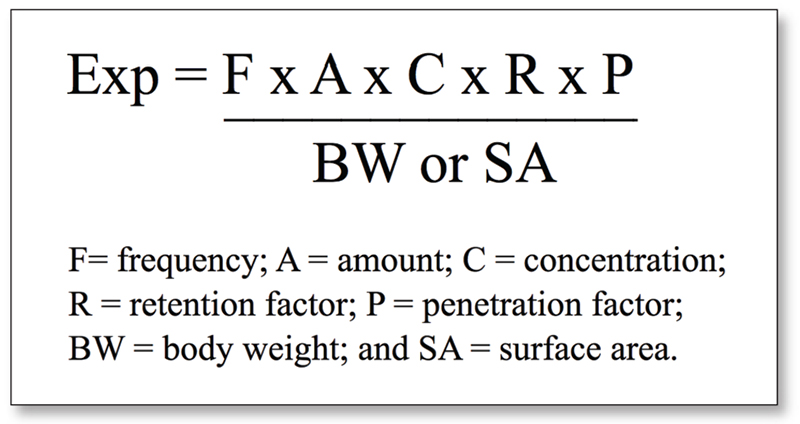 Testing in the modern world

One snarl of red tape for the European cosmetics industry is the need to comply with the cosmetics animal testing and marketing bans (under 1223/2009/EC) while also meeting the terms of REACH, the EU regulation that requires any company wanting to market a particular chemical substance to register said chemical.

Dr Julia Baines, Science Policy Advisor for PETA, explained that in 2014 the ECHA and the European Commission (EC) delivered a joint statement saying that cosmetic ingredients may still require animal tests for the purposes of REACH.

It read: "Registrants of substances that are exclusively used for cosmetics may not perform animal testing to meet the information requirements of REACH human health endpoints, with the exception of tests that are done to assess the risk to workers exposed to the substance.

"Registrants of substances that are used for a number of purposes and not solely in cosmetics are permitted to perform animal testing as a last resort for all human health endpoints."

Dr Baines noted: "We have a problem as an NGO with this particular statement – we don't believe that this interpretation is legally robust."

One legal issue raised by PETA is that the Cosmetics Regulation isn't a human health regulation (like REACH), but a marketing one.

Moreover, Dr Baines said the joint statement also violates REACH, because REACH cannot be used to circumvent the requirements of the Cosmetics Regulation.

Following this, scientifically-advanced in vitro methods were covered by Dr Carol Treasure, CEO and founder of XCellR8.

The company offers in vitro tests that not only provide an upgraded alternative to animal tests, but which are also entirely animal product-free.

For example, there are fully-approved in vitro tests for three of the key events in the skin sensitisation pathway: Direct Peptide Reactivity Assay (DPRA) for contact; KeratinoSens to measure the release of pro-inflammatory cytokines; and human Cell Line Activation Test (h-CLAT) for dendritic cell activation and maturation.

While DPRA uses no animal-derived components, KeratinoSens and h-CLAT do, so over the past few years XCellR8 has replaced foetal bovine serum (FBS) and porcine culture reagents with human-based or synthetic alternatives. 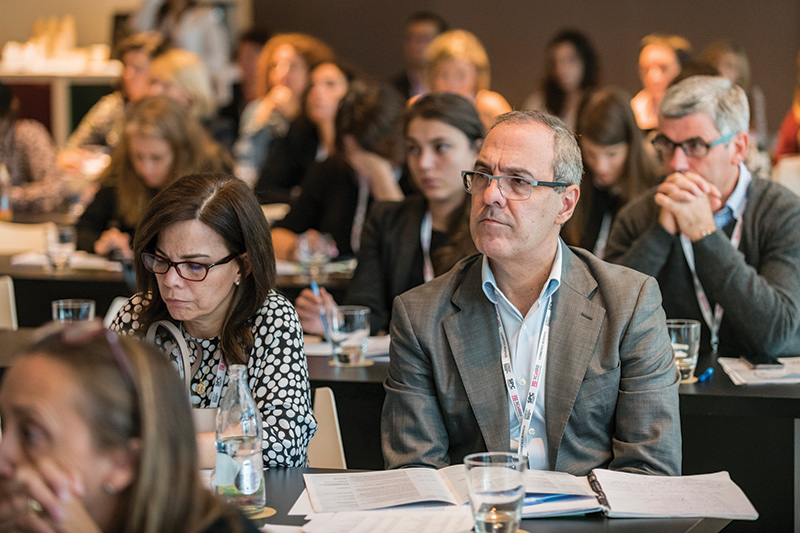 Gen Zers, she said, are hyperaware of the change they can influence and embrace inclusive, less gender-binary approaches to beauty. But equally, they lack patience and demand instant fulfilment.

Crucially, Gen Zers don't trust advertisers and, as such, Nayyar-Kamdar added, "we cannot hide behind 'puffery' about ingredients".

She also noted that "the internet is listening and watching", drawing attention to Gwyneth Paltrow's goop.com being forced to pay $150,000 in civil damages after an ob-gyn on social media disputed claims that its Jade Eggs could balance hormones, regulate the menstrual cycle, prevent uterine prolapse and increase bladder control.

There has been a recent vogue for out-of-this world products. Playing on this, Raphael Sauerwein of KTN Dr. Neuberger demystified claims compliance via a hypothetical Unicorn Moisturising Face Cream.

Theoretically, he said, he could include the text "with real unicorn tears", as claims acceptability is based on the "perception of the average end user".

That said, he jokingly told attendees that if he wanted to ensure compliance, he might choose to put: "The unicorn is... believed to possess magical attributes, but nobody has ever seen one."

He also looked into GDPR, recommending that companies wishing to process data should follow the principle of data minimisation and only ask for data that are really necessary.

Finally, for influencer marketing, Sauerwein said 'ad' or 'sponsored' should be superimposed onto photos or videos, while a clean meta-data hashtag must be used in the national language – for example, #ad (UK), #werbung (German), etc – and at the beginning of the content, rather than intentionally hidden.

Unlike standards and certifications from private organisaitons, ISO 16128 is a "tool to measure natural and organic content".

It doesn't tell manufacturers what they can and can't use, nor does it set a threshold limit for a product to be natural or not. Moreover, it isn't designed for communication purposes.

Esteban said ISO 16128 – which comes in two parts, Part 1 for ingredients and Part 2 for finished products – aims to promote transparency, encourage innovation and provide wide recognition at an international level.