LIGHTSKIN® is a natural depigmenting active ingredient obtained from biotechnological processes, rich in sulfur-containing peptides known for their capacity to limit melanogenesis. Pigment defects are thus attenuated, complexion is lighter and more uniform, and radiance is revived in Caucasian and Asian skin 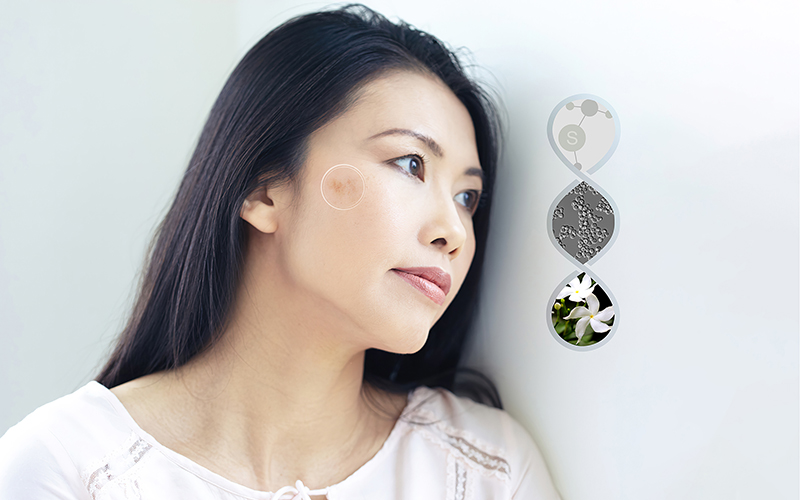 Sulfur-containing peptides are molecules known for their transversal ability to limit melanogenesis. For its new depigmenting active ingredient LIGHTSKIN®, Silab has selected the yeast Ogataea siamensis, whose natural capacity to produce sulfur-containing molecules constitutes a considerable selective advantage for its development in the phyllosphere of the medicinal plant Ervatamia coronaria.

This potential was then enhanced by Silab which decided to use its 15 years of expertise in biotechnologies to develop a unique process for bioguiding this yeast, specifically stimulating the production of large quantities of these molecules of interest.

This richness in bioguided sulfur-containing peptides enabled the global depigmenting action of LIGHTSKIN® to be doubled on Caucasian and Asian melanocytes, significantly limiting tyrosinase activity and melanin production.

This efficacy was also demonstrated in pro-pigmenting contexts of pollution (receptor related to pollution (AhR) inactivated) and glycation (expression of the receptor for AGEs inhibited).

LIGHTSKIN® was evaluated in volunteers selected on the presence of pigment spots, and more specifically on their high level of AGEs (Caucasian panel) or their history of living in polluted environments (Asian panel).

The results showed that the active ingredient at 2.5% reduces the appearance of spots after 56 days of treatment on both panels. Uniformity of the complexion is thus improved, and radiance is revived. 91% of Asian volunteers stated that their complexion was more uniform and brighter, and their spots less visible.

With its targeted performance, LIGHTSKIN® is a patented active ingredient recommended in all depigmenting care products at the amount of 0.25 to 2.50%. Available in aqueous solution, it is easy to formulate. It complies with biodiversity regulations and has a natural origin content of 98.8% (ISO 16128). It meets international cosmetic regulations requirements (Europe, United States, China, Japan, etc.)