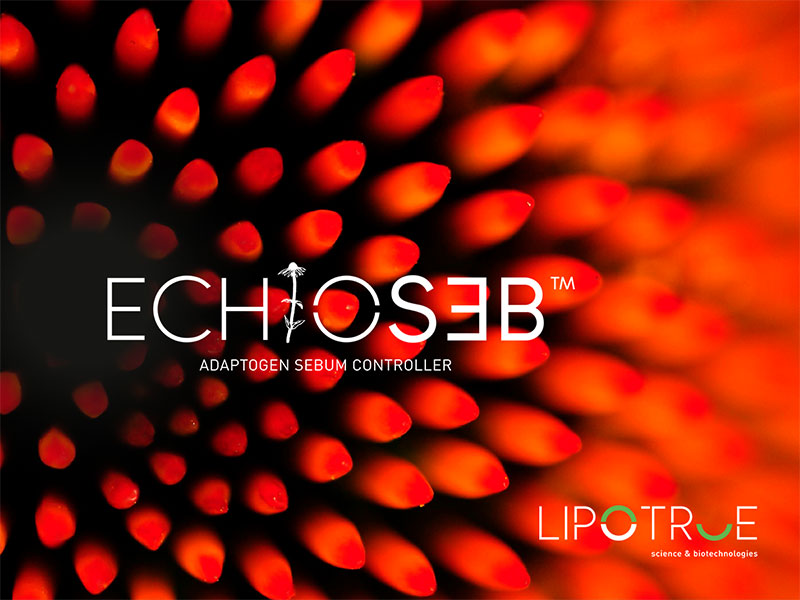 Fighting against oily and shiny skin has always been a challenge. Oily skin is characterised by its greasy, dull, shiny appearance and enlarged pores. On the other hand, combination skin has an oily T-zone (forehead, nose, and chin) and normal or dry skin on the rest of the face. Its origin is in the sebaceous glands, where more sebum than necessary is produced due to hormonal, emotional, and dietary factors that can lead to an imbalance in the skin's sebum.

Echioseb™ is the adaptogenic sebum controller that customises its efficacy by adapting to the different needs of combination and oily skin. Its adaptive capacity allows the skin to normalise sebum content and release, pore size, elasticity, and moisturisation following the retinoids steps.

Its origin is found in the Echinacea purpurea and the stem cells from Rhodiola rosea from the Greenology technology. We know that adaptability is a critical quality for plant survival in hostile conditions. Echinacea purpurea is a drought-tolerant plant that has evolved mechanisms to reduce water loss (e.g., by partially opening the stomata) and increase water uptake, allowing it to survive during fluctuations in rainfall in the North American prairies.

Rhodiola rosea is an adaptogen known to the Vikings for improving physical endurance and mental acuity. This plant helps other organisms cope with stress factors to normalise metabolic functions.

The combination of these two plants makes Echioseb™ an active ingredient that adapts and normalises sebum production, pore size, elasticity, and moisturisation according to each skin's needs.