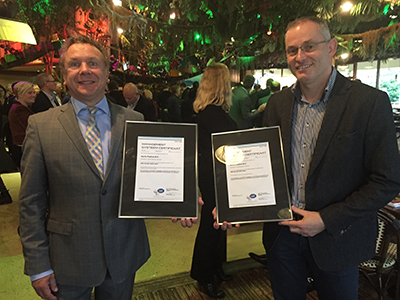 On December 3rd Aarts Plastics were handed over 2 certificates for ISO 9001 and ISO 14001. Exceptional was the fact that the company was the first in the Netherlands achieving this according to the brand new Standard 2015 in place since 1-10-2015.

With the new standard Aarts Plastics is taking a leading position in quality management for their production of fragrance caps, compacts and injection moulded food packaging.

One of the new aspects in the standard 2015 is risk oriented thinking.

Aarts Plastics has been implementing a new risk oriented system, enabling the company to secure their processes on all levels in the organisation.

Other striking differences between the new version (ISO 9001: 2015 ) and the current version: