Although the aerosol manufacturing industry is currently grappling with some seismic legislative changes, the future looks bright thanks to constant innovation and a focus on sustainability

Although the aerosol manufacturing industry is currently grappling with some seismic legislative changes, the future looks bright thanks to constant innovation and a focus on sustainability

At the end of this month the great and good of Europe’s aerosol industry will congregate in Rome for the European Aerosol Association’s (FEA) four yearly exhibition and biennial congress (21-23 September). And while the event follows a rocky period for many business sectors, there is a good deal of optimism surrounding the future of aerosol manufacturing. This is particularly the case with personal care, which together with household products makes up 75% of Europe’s entire aerosol industry.

Figures from the British Aerosol Manufacturers’ Association (BAMA) showed the number of units filled in the UK in 2009 was level with that of 2008.

“We were really pleased... because it’s been such a hard year for this industry, as it has been for all industries,” says BAMA director Sue Rogers. “The cosmetics and toiletries business in particular has survived the downturn very well. It’s an area where people aren’t going to cut back too much – they may trade down to cheaper brands, but they’re not going to stop using the products.”

A breakdown of BAMA’s data suggests 2009 was a mixed year of positives and negatives for the UK’s industry; while filling figures for suntan and bronzing slid dramatically (down 45.5%) and shaving products were down 16.8%, other personal care items increased 41.4%, with deodorants, antiperspirant and body sprays growing from 582.4 million to 586.4 million units.

However, Rogers stresses that BAMA’s 2009 filling figures reflected “business moving about geographically” as opposed to a rise or fall in consumer demand for certain products.

“Overall, consumer demand for aerosol products has remained strong,” Chris Cathcart, president of the US’s Consumer Specialty Products Association (CSPA) confirms. “Although there was a slight decline in number of units filled last year, it was the sixth highest year to date according to our North America annual aerosol survey.”

The production of cosmetic aerosol products in the US decreased for the first time in three years, dipping 0.8%. Here increases were seen in mousse and perfume and body sprays, while deodorant filling levels suffered the largest year on year dip in filling figures.

According to Rogers, most questions asked by BAMA members are technical or regulatory in nature. “A key area for everyone is the new Aerosol Dispensers Directive (ADD), which was updated by the European Commission in April 2008,” she says. “We gained some new members last year as a result and we can provide members with a very comprehensive guide to the directive.”

Among the changes to directive 75/324/EEC was the approval of a quality assurance system as an alternative to waterbath (the test that ensures the removal of potentially dangerous or faulty filled cans from circulation); an increase of the maximum pressure at 50°C to 13.2 bar for non-flammable propellants; and the reinforcement of hazard assessment of spray, which requires manufacturers to assess the risk of inhaling spray particles.

In addition, the ADD introduced classification for aerosols in line with global harmonisation (GHS), an issue also high on many agendas.

For aerosol manufacturers in Europe, the EU’s interpretation of GHS is (EC) No 1272/2008, or the Classification, Labelling and Packaging (CLP) regulation. Under this, explains Rogers, “all labels on all consumer products between now and 2015 will have to be updated,” an undertaking she describes as “massive”.

Another section of GHS affecting the aerosol industry relates to changes to the transport of dangerous goods, which will come into effect next year.

“Aerosols are dangerous goods in terms of transport, although aerosols below a litre can be transported as limited quantities, which means some of the really onerous requirements – like UN fully certified packages and full documentation – are lifted,” says Rogers.

The most pressing issue manufacturers in the US are facing, according to the CSPA, is the modernization of the 30-year-old Toxic Substances Control Act.

“Our members have been heavily engaged with us to review the current law and develop recommended strategies for improvements,” Cathcart says. “It is very complex and will impact our industry as processors and formulators of products that contain TSCA-regulated chemicals.”

Two bills have been introduced in Congress, but Cathcart adds it is unlikely either will move this year.

An eye for a trend

Aerosol products – both traditional and can-in-can – account for over half of turnover at Swallowfield plc and the company keeps a keen eye on current and future aerosol trends. Ceo Ian Mackinnon identifies self-tan products as “a big format over the past three or four years” and dry shampoo as an “area seeing a big comeback”.

The resurgence in use of dry shampoo has been driven by styling trends among young women, says Angela Kokshoorn, marketing director, Vivalis. “We found that although Batiste customers covered a really wide age range, the majority of our new users were between 16 and 25,” she tells SPC. “We did a lot of research and what we found was that the trend for poker straight hair is disappearing. Girls now want hair with texture and volume.”

Vivalis’ research also found Batiste users to favour aerosols above other application methods. “A majority of the people we surveyed said they preferred aerosols because they found them more convenient and because they give a more even spread,” Kokshoorn adds. “Another positive was that the aerosol shampoo is not embarrassing to use in front of friends. Shakers were felt to be a bit messy and unattractive.”

According to Mackinnon, next year will see an even more diverse range of products offered in aerosol format: “An upcoming area is for aerosol sun care; in the next 12 months we think this is going to be a big trend.”

As the CSPA’s Cathcart explains, increased use of can-in-can formats has expanded the range of products that can be dispensed via aerosol. “Various technologies that have the propellant separated from the product have allowed a number of new products to grow in recent years, including skin sprays like suntan products as well as thicker products that normally would not be packed in pressurised self-dispensing aerosol packages,” he says.

In North America, Energizer Holdings Inc put itself ahead of the trend with a line of aerosol UVA and UVB protection sprays launched under its Banana Boat brand and packaged in aluminium cans supplied by CCL Container.

Coming years could also see the introduction of aerosol mouthwash and nutricosmetics as ColepCCL has created a one-handed, internal application delivery device that is activated via contact with the user’s mouth.

The system uses air or nitrogen as a propellant and can deliver products including mouthwash, breath freshener and teeth whitening treatments as well as oral supplementation.

Aesthetically, shaping and effects like embossing and debossing remain popular and it’s now common for packaging suppliers to offer shaped cans as standard. Nussbaum’s Cosmos and Aerocan’s curved profile Comby can are two such examples.

In some cases modifications may improve performance; one supplier introduced an inverted bead to its standard cans to improve tightness, boosting the long-term efficacy of the aerosol.

“One of last year’s BAMA Awards was awarded for a very flexible print system, which helped manufacturers save money by allowing for shorter print runs,” adds Rogers.

Swallowfield’s Mackinnon notes that there has been work within the industry on plastic aerosols. “But they haven’t really taken off and I don’t think they will,” he adds.

The greatest strides made by the aerosol industry in recent years have been towards improving sustainability.

“We do a lot to educate people about the environmental benefits of aerosols,” explains Rogers. “Older generations often associate aerosols with CFCs and it’s our job to explain that CFCs haven’t been used in the aerosol industry for a very long time.”

Air quality is one area where the industry is boosting its eco credentials and suppliers are increasingly offering greener options.

In 2008, Crown Aerosol Packaging in collaboration with Chris Scheindel (president of Ultramotive Corporation) responded to new directives from the California Air Resources Board (CARB) to reduce VOCs in certain consumer products (which came into effect at the beginning of 2010) by creating a green dispensing system for gels and viscous cosmetics.

“The EarthSafe Dispensing System helps brand owners meet these requirements by replacing hydrocarbons with compressed air as the propellant,” explains Brad Dahlgren, vp sales and marketing at Crown Aerosol Packaging North America. “This important change reduces VOCs and in turn decreases the impact on the environment.”

For those aerosols requiring non-flammable liquefied gas propellant (such as the recently banned HFC-134a) Honeywell Speciality Materials has developed HFO-1234ze, a low global warming alternative. Meanwhile, KBIG Ltd has turned its expertise to the creation of non-VOC propellant technologies based on coconut carbon (see box on p56). 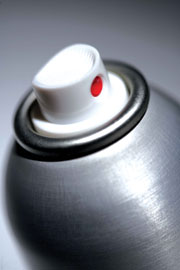 Aerosol cans are also undergoing a greening. Aerocan recently developed an internal powder coating as a replacement for current liquid epoxy-phenolic coatings, which can contain up to 70% by weight of solvent. Tubex’s Yes Green Can likewise features a solvent-free internal coating as well as a water-based base coat and over varnish. The can is also made with 20% recycled aluminium and is weight reduced.

Moreover, manufacturers and suppliers are applying sustainable principles to all stages of production.

According to Dahlgren, the UK plant of Crown Aerosols “has placed a significant focus on incorporating sustainability throughout the production process,” an operation that involved “examining ways to reduce waste and spoilage” and which is “largely focused on energy consumption”.

Meanwhile, Cathcart tells SPC that many CSPA member companies’ products bear the logo for the US Environmental Protection Agency’s Design for the Environment (DfE) programme. Some he says have even received US Presidential Green Chemistry Challenge Awards in recognition of their efforts in the green chemistry field.

Another important area is product afterlife. Although 75% of local authorities in the UK now recycle empty aerosols, Rogers finds that while people are good at recycling kitchen containers, they are forgetful when it comes to the bathroom and bedroom.

“The quickest way to educate consumers is to work with local authorities, which have the infrastructure to create and distribute information,” she says.

From a social responsibility standpoint the industry is also involved in helping tackle volatile substance abuse. BAMA recently advised Kids Taskforce, on an episode of its personal safety soap opera Watch Over Me dealing with substance abuse.

“Overall the industry is holding up extremely well,” Rogers summarises. “There’s a lot of innovation, a lot of progress regarding sustainability and the future looks extremely bright.”

Which gas?
KBIG Ltd, which specialises in the development and commercialisation of intellectual property for a wide variety of markets, is currently focusing on creating propellant technologies for use in aerosols. Mike Garrett MBE, director of innovation and technology at KBIG, tells SPC about the latest advances in propellants
Traditionally most aerosols have used volatile organic carbons (VOCs) as pressurising gases, even though variations in room temperature noticeably affect performance. Environmental concerns have also been raised.
Three other gases – air, nitrogen and carbon dioxide – are environmentally friendly but do not give an acceptable pressure profile on their own.
A breakthrough technology, using environmentally positive coconut carbon, has enabled these gases to achieve an improved aerosol pressure performance. This exceeds the performance of VOCs and is cost neutral on the commercial scale.
The current trend is towards reduction of the environmental impact of conventional technologies, and the aerosol industry is very conscious of the need to avoid the release of VOCs wherever possible, whilst still maintaining acceptable performance.
Aerosol cans using the new system are fully recyclable and avoid the fire and addiction hazards associated with some current propellants. They are fully compatible with conventional bag-on-valve systems.
Contact Andrew Martin (tel +44 20 8669 6263 email a.martin@kbig.co.uk)