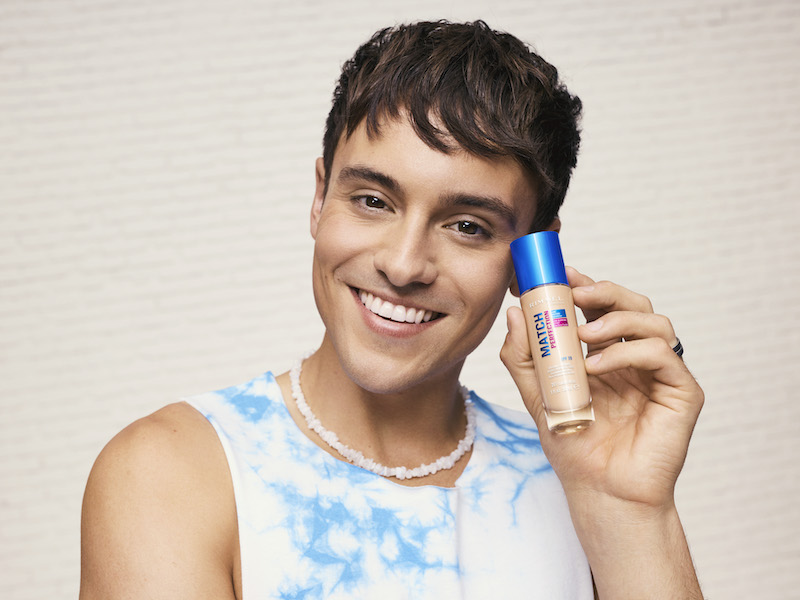 “I am delighted to be Rimmel’s first global male ambassador,” said Daley.

It’s incredibly exciting to see that beauty is diversifying and becoming fully inclusive, and I’m thrilled to be a part of this movement.

“At last, everyone can feel proud about looking and feeling the best version of themselves, no matter their gender.”

Daley joins the list of celebrities such as Kate Moss, Georgia May Jagger, Cara Delevingne and Rita Ora who have previously been Rimmel London ambassadors.

“Rimmel’s partnership with Tom Daley marks an exciting new era for the brand. We are proud of our mission to prioritise diversity and inclusion and feel honoured to have Tom as our first global male ambassador,” added Sarah Al Shohaib, Rimmel Senior Vice President.

“As a world-class athlete and an advocate for mental health and LGBTQI+ rights, Tom is a powerful role model.

"By working together, we aspire to encourage greater beauty acceptance and self-expression for everyone.”

Daley began diving at the age of seven as a member of the Plymouth Diving Club.

His talent for the sport was identified early, and he would go on to represent Great Britain at the 2008 Summer Olympics where he was Britain's youngest competitor at the age of 14.

Daley has been hailed for his support of the LGBTQI+ community, raising awareness of mental health issues within the sporting world and for his love of knitting.

Rimmel's Match Perfection foundation has been formulated to keep skin hydrated and contains SPF20 to protect it from harmful UV rays.

The 24-hour moisture complex, which features soft-focus powders, provides buildable coverage that is easy to blend.

Available in 25 shades, the foundation retails for £8.99 at Boots stores and boots.com.

Alessandro Michele steps down as Creative Director of Gucci
How robots and AI are pushing the boundaries in nail care
Why face make-up is behaving like sophisticated skin care
The lip oil craze taking social media by storm
The 8 best beauty launches to watch for this July
Kylie Cosmetics’ new Gloss Drip launch sells out within 24 hours
Bourjois returns to UK market following dramatic 2019 exit
A fairytale story: Why premium beauty is having a crowning moment
Queen Latifah returns as face of CoverGirl after more than two decades
‘We are back on track’: Sue Nabi talks Coty’s Q3 results and future for cosmetics
CoverGirl names country music star Kelsea Ballerini as new brand face
Kylie Cosmetics and Kendall Jenner join forces for new collab
Bill to ban PFAS in cosmetics moves forward in Washington
Step aside K-beauty: British beauty is preparing for its turn in the spotlight