Following on from the success of last year’s event, Surfachem once again supported the Bradford Science Festival 2019 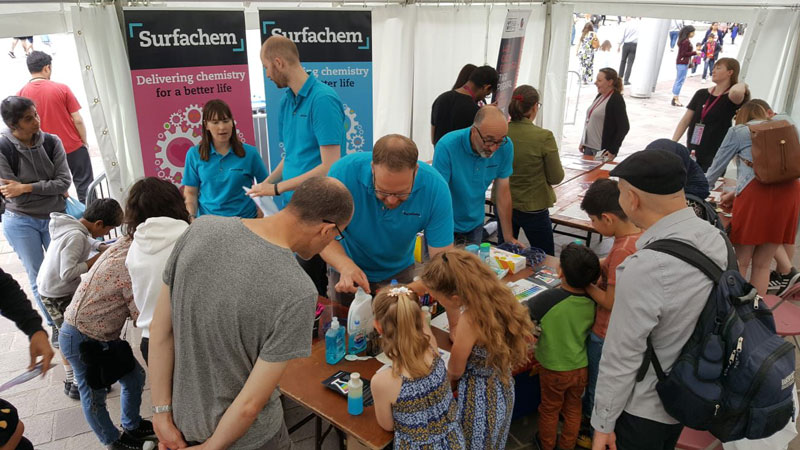 Held between the 18 and 21 July, the Bradford Science Festival continues to be an extremely popular, free-to-attend event which offers science-themed content, activities and demonstrations for all members of the family.

Starting two years ago, the festival has built its reputation and last year, boasted 34,000 visitors across the three days of events. This year, there were a variety of experiences held simultaneously around Bradford, including: The National Science and Media Museum, Bradford’s City Park and The Broadway Shopping Centre.

As part of 2M Holdings, Surfachem’s continued year-on-year sponsorship of the Bradford Science Festival truly highlights our passion and commitment in developing awareness and careers with the areas of Science, Technology, Engineering and Maths (STEM).

14 Surfachem representatives attended the event and introduced what Surfachem does and their roles within the business. As part of Surfachem’s stand, the core demonstration focused on practically showcasing pH levels across a range of products across different industries, including food and beverages, home care, and personal care.

In addition, Surfachem also received huge support and engagement for its ‘Big Kid, Little Kid’ initiative, an upcoming product concept which will be launched later in the year. During the festival, Surfachem encouraged children to engage with the concept by allowing them to get creative and design logos.

The festival was a huge success and continues to prove to be a fantastic opportunity to shine a positive light on what chemicals really do, their present and future capabilities and how Surfachem are delivering chemistry for a better life.