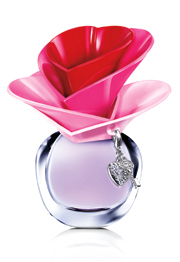 Having netted over $3m in retail sales in less than three weeks in the US, singer Justin Bieber’s fragrance, Someday, launches today in UK luxury retailer Harrods.

The Canadian megastar’s feminine fragrance is the first product developed by Give Back Brands LLC, which works with entertainment artists to create fragrances whose profits go to charity. In Someday’s case, all proceeds will go to children’s charities Make-A-Wish Foundation and Pencils of Promise – which establishes schools in developing countries – both of which are said to be causes close to Bieber’s heart.

The scent, designed with women of 15-25 in mind, opens with gourmand top notes of mandarin, William pear and wild berries, fading to a heart of jasmine, water lily, creamy florals and coconut orchid, and a dry down of sandalwood, vanilla and soft musk. The packaging, meanwhile, is notable for its cap, which features layers of hearts.

Commenting on the name, Bieber said: “Someday is the idea that we can change the world, make our dreams come true and even be with the one person that means everything. Giving back has always been incredibly important to me, but let’s be honest… I wanted to create a fragrance for my female fans that I can’t get enough of.”

“Justin was heavily involved in creating Someday even though he was touring at the time – we met with him on tour busses all over the States. For a 17 year old he’s very poised, very decisive and he knew exactly how he wanted the fragrance to smell and look like,” Noreen Dodge, executive vp, global marketing at Give Back Brands told SPC. “He wanted the fragrance to be a personal gift from him to his fans, but he also said it was how he would like his ideal girl to smell.”

Someday is available in 30ml, 50ml and 100ml edp variants, costing between £23-£38, and the Someday range also includes Swept Away Hair Mist (£12.50) and Touchable Body Lotion (£15.00). Currently, the products – which are distributed in the UK by SAS & Company – are exclusive to Harrods, but will launch nationwide in September.

Give Back Brands says it intends to roll out the fragrance globally throughout 2012.