Paracelsus was a 16th century scholar and father of toxicology. He recognised the difference between a hazard and a risk. So, by definition, a hazardous substance is something with the potential to cause harm. A risk is judging in what context or the likelihood that the hazard will cause harm. For chemicals it is often the amount that creates the risk. By extreme example, drinking too much water can cause harm and could therefore be classed a hazard.

What regulators seek to identify are whether substances are persistent, bioacummulative or toxic. Persistent asks the question: how long does the substance stay in its environment? Bioaccumulation is its ability to pass through the food chain and increase over time. Toxic asks whether the substance is harmful at a biological level to organisms. So PBT and increasingly vPvB where the v stands for very are the the effects regulators are assessing when they try to rule on what substances are safe and which are not.

To make these assessments regulatory authorities around the world either take a risk or hazard based approach and the following map shows some of the major regulators and their approach. The US, Canada and Australia all take a risk-based approach and recognise that at certain concentration levels many chemicals pose no threat to health. This contrasts with Europe and Japan where once identified as a hazard it is best to avoid those chemicals completely. 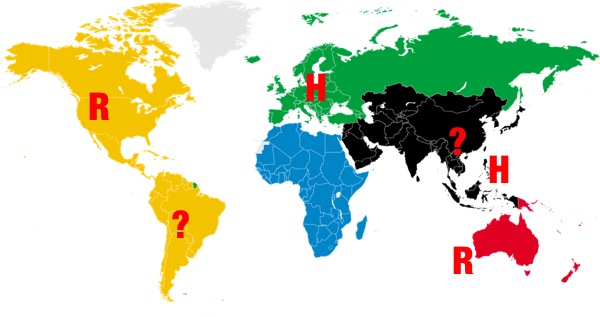 China, Korea and many South American authorities are currently considering which methodologies to implement.

It really does matter to manufacturers of cosmetics as it limits the number of ingredients from which they can choose. To be truly global with a product without altering its formulation it is clear that the product must comply with the strictest regulatory regime. Some of the speakers argue that this limits innovation and deprives consumers of the best products based on the most innovative combinations of ingredients. It can also be argued that because cosmetics tug at emotions as much as logic that they are easier for environmentalists to target.

Endocrine disruptors are clearly bad and when we are talking about increasing the risks involved in reproductive systems no risks should ever be taken especially not with cosmetics. So parabens were identified in the early 2000s as a hazard in this area, however the study made some big leaps in terms of the science and the doses concerned. The reality is the study did not show that parabens were really the problem, but the linkage created in the press now means 'paraben-free' is a selling point. Does this make parabens 100% safe? No, not at all. But no one has conclusively shown they are a risk either.

Microbeads have also come under massive pressure in the press and by environmentally inclined politicians. They qualify as both persistent and bioaccumulative. They are used in cosmetics and can enter the water cycle through washing from the skin and then through drainage eventually enter the ocean. They are being accused of being one of the main offenders for entering the marine food chain through small molluscs and bottom feeders. However, there is much evidence to say that they are not toxic even to small marine mammals. The cosmetic contribution to small plastic pollutants is less than 0.5%, the main offenders are particles from road tyres that get washed into the oceans through drains. This is recognised by environmentalists and yet the press and campaigners mainly target the cosmetics industry as it is a much more emotional target.

Does this make parabens or microbeads totally safe to use? "Not necessarily" has to be the right answer. Yet if this approach without assessing context and risk was taken on all activities we would find our daily lives restricted in many more ways. What is needed, according to an inspirational talk from Paul Anastas on green chemistry, is more thought about where we start from to create great products. He eloquently made the point that unless you start with a holistic and linked approach then we will always find ourselves trying to argue whether a particular thing is safe or harmful. However, we should always start with goal of creating the best cosmetic product without compromising in terms of quality or efficacy. To do this in a safe and responsible way it is necessary to embrace green chemistry principles at each and every stage – then the end product will always comply with environmental, health and emotional concerns and regulation. It was a powerful message and one well received by the audience.