The 'skin first, make-up second' brand has extended its Covent Garden store until the end of 2020 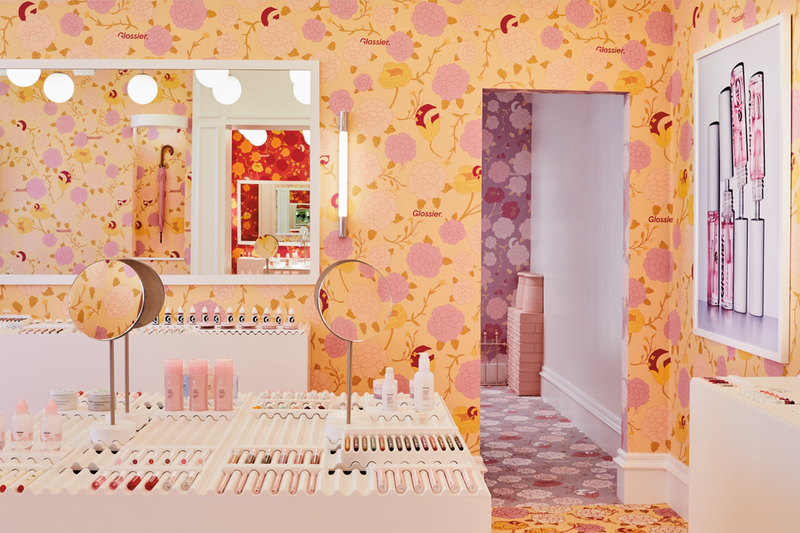 After a record-breaking footfall, Glossier has announced that it will extend its London pop-up until the end of 2020.

The Covent Garden store has been crowned the brand’s ‘most successful pop-up of all time’, with more than 100,000 Glossier fans through the door.

Britain is the brand’s second largest market after the US.

The Floral Street location opened in November 2019 and was expected to close on 9 February, but plans changed after the store outperformed expectations and reported the highest average daily sales of any of its global pop-ups.

This is the second UK capital temporary space the Glossier has opened. Alongside its two permanent locations in New York and Los Angeles, the cosmetics brand has opened short lived stores in Miami, Seattle, Boston and Austin in the US.

The company takes pride in designing its pop-up to reflect the store’s city, or what the brand calls ‘Glossier-coloured glasses’.

Inspired by traditional social clubs, the London space features a Glossier twist on floral Liberty-like wallpaper as well as a hidden ‘Glossier Rooftop’ that pays homage to the city’s skyline.

All of the brand’s cult favourites will be available, but fans can also get their hands on a store exclusive Glossier London Umbrella.

For every sale of the umbrella, £5 will be donated to women’s employment charity Young Women’s Trust.

Glossier has achieved financial and critical acclaim thanks to its direct-to-consumer business model, but the digital brand is becoming seasoned in bricks-and-mortar retail.

Florence By Mills and CeraVe crowned 2022’s hottest beauty brands
Year in review: 2022’s biggest beauty stories and headlines
Glossier will be stocked at Sephora from 2023
Glossier brings back permanent beauty store to Miami
Glossier is back in Britain, naming London store as international flagship
Op-Ed: The end of the digital native beauty brand
Glossier goes above and beyond in mass return to retail
Cosmetics Business reveals the 5 latest colour cosmetics trends of 2021 in new report
Glossier secures $80 million new funding, valuing the digital native at $1.8 billion
Glossier makes global return to retail
'This is not a lovely PR story': Why beauty brands are supporting black-owned rival businesses
Glossier to cut all in-store retail jobs
Beauty retail: Why the ‘new normal’ isn’t really working out
Coronavirus: Glossier has closed all of its stores