Glamglow’s founders started out selling their products to make-up artists and celebrity friends in Hollywood. Today it has plans to expand globally and increase its presence in spas

Husband and wife co-founders, Shannon and Glenn Dellimore, initially set up Glamglow exclusively for behind the scenes make-up artists in the Hollywood entertainment, music, fashion and awards industries in 2010. However, recognising its wider potential, a year later the products were then released to the consumer retail market, which built upon the fiscal and social successes of the brand's first year of trading. Three years later and Glamglow is now sold in 53 countries worldwide, with a target to be sold in 60 countries by the end of 2013 and an additional 18 countries by 2014. 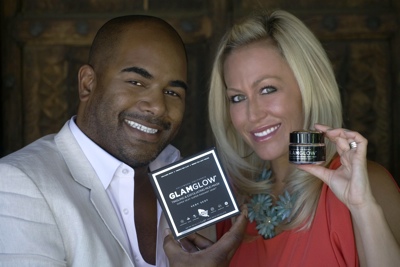 When the idea of Glamglow was first conceived, the couple intended the treatments to be used solely by their close friends rather than retailing for consumers. Glenn Dellimore picks up the story: “It was never our intention to create a business, but just to create a product for our celebrity friends.” He continues: “We provided our formula in simple unmarked white jars and our actor friends loved it and told their friends, and eventually the Hollywood studios started calling. Even after selling the product to Hollywood for a year, we still had not named the product or created packaging. It never occurred to us to create a business, not until our friends and studios started saying “you should sell this stuff, it's magic”. We kept hearing that type of comment and then named our magic mud Glamglow.”

From the positive feedback, the Dellimores gained validation of and confidence in Glamglow's efficacy and started to think about the idea of sharing their product on a larger scale. “One day a major US retailer called and asked if they could sell our product and place it on counters alongside brands like La Prairie, Chanel and Dior. They said that our formula was “that good”, but they could only sell it if we had packaging,” explains Dellimore. “We created concept packaging at home on our coffee table and after launching with the requested retailer we started to receive calls from all over the world from people who had tried Glamglow and wanted to launch it.”

Glamglow’s award winning first product, Youthmud, was created to be a quick fix product for use at backstage events, and designed to help promote a better complexion. The product was created after the Dellimores spoke to actors about necessities on a film set. Dellimore continues: “Actors needed a quick fix skin care product that could work in ten minutes or less for their professional use just before going on camera. It seemed that the cosmetic beauty industry was preoccupied with large skin care ranges of multiple products, often taking days or weeks to work. We simply could not find what the Hollywood actors needed so, as a favour to our friends, we decided to try and make a formula ourselves that would work after one use.” The Glamglow range now consists of three core products: the original Youthmud, sold at £49.99 for 50ml, and two newer products, Supermud, priced at £44.99 for 30ml, and Brightmud Eye Treatment, which costs £44.99 for 12 treatments. 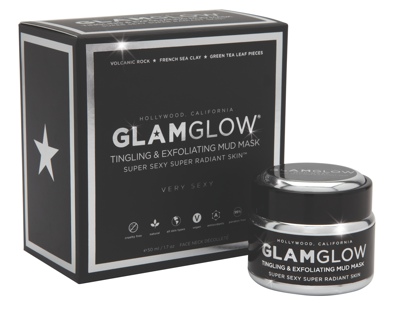 The small range targets men and women of all ages and skin types who want help with brightening and evening the complexion, creating a more youthful and smooth skin tone, improving elastin and collagen, de-clogging and minimising pore size, and fighting unwanted breakouts. “We don’t believe consumers choose Glamglow over others, but we do know that they choose Glamglow as well as their favourite daily skin care brands.” Dellimore succinctly sums up the reason why people buy the company’s products: “Everyone looks for something different, but if it came down to one word it would be: results.”

The decisions within the company are made exclusively by the co-founders who create the products from formulation to packaging in their Californian home. The homegrown aspect of their business continues with 12 staff working from the couple’s house every day. “It’s a 'holiday feel’ work environment that oozes creativity, calm and confidence, providing our staff with a feeling of family team,” Dellimore says. “Every month we take our staff on a company outing from zip lining to a theme park, or track car racing to a spa day. We provide everything for our team that creates loyalty and enjoyment.” Dellimore believes it is this ambience and feeling that exudes from the company’s internal functions that underpins its success and uniqueness in the market. “Glamglow is an honest brand,” he says. “We are our biggest critics and we question everything as a consumer. This core value ensures we add the maximum into a formula irrespective of cost.” Dellimore adds: “Supermud fixes everything and, rather than breaking up the product into six products as skin care companies would usually do, we created a product that does everything in one, providing great efficacy and great value for money.”

Dellimore states that the price point of the Glamglow products is pivotal to the success of the brand. “We carefully consider many factors in pricing and have become the first skin care company to set all of its products at the same price irrespective of how much our product costs us to make,” he says. “For example Supermud is six times more expensive to produce than Youthmud, but we priced it the same; we make less money, but we are more excited to help consumers get great value and efficacy.” From this point, the fiscal rewards that the products generate mirror the way the company was initially founded. “We never think about profit, sales or revenues, our focus is creating the best possible formulas, packaging and branding. Our company creates and operates from the heart and our business decisions are free from red tape or politics. Our goal is to satisfy and excite with a lifestyle experience and amazing efficacy.”

With consumers growing in their awareness of products that under deliver on claims, Glamglow aims to under promise and over deliver as the product is all about immediate results at the more scrutinous end of the consumer spectrum. While Glamglow's strength currently lies in retailing backstage at celebrity and Hollywood events, the company has moved into the global spa market too in order to expand its product reach. “We are currently in around 400 luxury spas worldwide, like the Canyon Ranch Spa Club and the Four Seasons,” Dellimore says. “Naturally, we offer a back bar protocol for either a full Glamglow facial with all our three products or an add-on. We offer a subsidised professional size pricing. We have a few spa distributors in various international territories and are currently expanding our global spa distribution. Our spa division has a lot of opportunity with growth potential and we are looking towards a greater presence in worldwide spa back bars and spa retail.”

One of the first spa product retailers to sell Glamglow products in the UK was the Urban Retreat at Harrods. The decision was made to sell the products after one of the retailer's cosmetics buyers came across the brand's products while on business in Hollywood, in the early stages of the company’s growth. “She returned back to London and after using Glamglow for a few weeks she contacted us. She said that the results of Glamglow blew her away,” says Dellimore. From this conversation, Urban Retreat was named the inaugural retail spa distributor of Glamglow in the UK.

Glamglow's spa distribution with the Urban Retreat and other companies has provided a financial boost to the company and further growth in global spa distribution is in the pipeline. Since expanding from selling to a niche and specialised audience, to a wider, more consumer focused segment, Glamglow has reaped financial rewards. Glamglow's sales revenue in it’s first year selling to studios in 2010 was USD $40,000. The following year, revenue totalled $650,000, while in 2012 revenue sales totalled $3.5m. And the current year is looking to exceed all expectations that the company had when it started out, formulating products for friends back in 2010. Dellimore reveals: “2013 is on target for $18m, with our revenue streams generated from retail, spas, hotels and duty free travel retail. And Glamglow's growth isn’t scheduled to stop here, with the brand set to launch in Latin American countries and the Far East over the next year. “The most important launch in Asia has been China,” says Dellimore. “Glamglow launched in China with Sephora in 170 stores and within the first week became the number one selling skin care product in Sephora China in store and online. China represents a difficult and highly competitive market and we are excited to lead the skin care world in Sephora China. In January 2013, Supermud became the number one selling skin care product in Sephora's Hot Now history.”

Looking to the future, Dellimore hopes to hit $40m in revenue sales in 2014 and over $100m in 2015 due to the launch of new ranges and scheduled expansion. Among its new products, Glamglow has released a limited edition variation on its Youthmud product on its international site, housed in pink packaging called Cure Sexy. Of the profits, 25% from each sale of the product will be donated to the National Breast Cancer Foundation whose mission is to help raise awareness of breast cancer. This scheme is also due to be released in the UK in due course.

Although ten years’ time is a long way off for a company that has only been in business for three, Dellimore hopes that Glamglow will become “a global household name and a major player in the global skin care market” over the next decade. And, having already secured the backing of celebrities and consumers alike, it will be interesting to see how Glamglow develops over the coming years.