Cosmetic face masks contain several functional ingredients including clays and other rheology modifiers, and the mixing process is critical to obtaining functionality and maximising the yield from these ingredients.

Conventional agitators and stirrers can be inadequate for these mixing tasks as they don’t produce sufficient shear needed to ‘activate’ the functional ingredients.

This is especially true of the clays, gums and thickeners used in face masks.

Although a conventional agitator may be capable of incorporating clays such as Bentonite or Kaolin into water or another base liquid, the low shear mixing action is unable to activate the gelling effect required to achieve the desired viscosity of face mask products.

Similarly, with thickening and stabilising agents such as such as Xanthan Gum or Veegum, agglomerates tend to form when the powder is added to the liquid base.

These agglomerates cannot be readily broken down by a conventional agitator and consequently it can take a long time to fully hydrate the ingredients.

The intense shearing action of a Silverson rotor/stator mixer breaks down even hard agglomerates and it is able to rapidly reduce particle size down to between 2 – 5 microns, eliminating the need for any additional milling equipment.

The high speed, high shear mixing provided by a Silverson ensures the thickening effect of the clay is activated and the improved process efficiency means mixing times can be reduced by up to 90%.

Other problems that arise when rheology modifiers have not been correctly dispersed into the base liquid include unsatisfactory texture in the finished product and problems with shelf-stability.

If agglomerates in the mix are removed by filtration this can result in poor yield of thickening effect.

The high shear mixing action of a Silverson mixer allows the machine to disperse many of the functional ingredients in a basic face mask formulation.

The high shear rotor/stator workhead draws ingredients into the workhead as soon as they are added, subjecting them to intense shear as they pass through the holes in the stator.

This results in an agglomerate-free dispersion in a matter of minutes and maximised yield/functionality which could allow some products to be reformulated with reduced gum content, cutting raw material costs.

Once the clays are dispersed, additional ingredients such as moisturisers, fragrances and surfactants can then be added to the mix. As the clays are shear thinning the mixture remains mobile while the mixer is running and the vigorous mixing action of the Silverson mixer will evenly disperse these ingredients throughout the product. 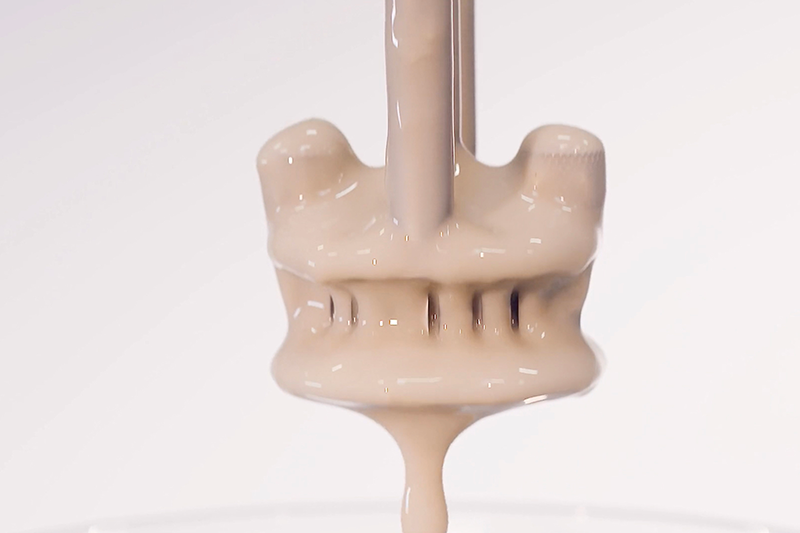 When the mixer is switched off and the shear force is removed, the viscosity increases rapidly to give the desired finished texture.

Silverson mixers are incredibly versatile due to the range of interchangeable workheads, allowing one mixer to be used for many applications across a range of industries and the results obtained with a Silverson Laboratory mixer can easily be replicated on a larger scale as all Silverson equipment is precision engineered to the same fine tolerances.

In the cosmetics industry Silverson mixers are used by many companies for applications including the preparation of gels such as Carbopol, Hydration of SLES, Manufacture of creams and emulsions and dispersion of Titanium Dioxide and other pigments.